After the lean years that followed the global financial crisis, Perth’s apartment developers are making the most of strong off-the-plan sales, with up to 70 per cent of units at some new projects selling in the first month.

Colliers International director of residential Jo-Anne Chin said sales had more than doubled this year compared with the slow conditions after the GFC.

“Over the past few years, investors were pretty much out of the market but they’re back this year,” Ms Chin said.

“There’s also been an increase in the downsizer market and the price-conscious first homebuyers.”

“In the last few weeks there were also a substantial number of sales at Velo on Aberdeen Street in Northbridge, which only launched in the last month.

Off-the-plan sales at Finbar’s Spring Towers in Rivervale have averaged 20 per month in the past eight months.  More than 85 per cent of the 188 units in the development have been sold.

Research by Colliers also points to a strong contingent of Asian buyers.

One of the last development’s to hit the market this year will be Pindan’s Viridian at China Green in Subiaco, which will be launched in the next few weeks.

Knight Frank residential director Neil Kay said the high level of demand in the inner city market was now reaching out to Perth’s eastern gateway with brisk sales at a new Burswood project.

In the first few weeks of marketing, 33 apartments were sold at Hawthorn Green, which overlooks G.O. Edwards Park.

Mr Kay said the casino complex, the new football stadium, improved infrastructure and close proximity to the river, CBD and the airport made it an ideal location.

Hawthorne Green is also being sold by Mont Real Estate and when finished will add 146 apartments over 18 levels to the Burswood precinct.

“That level of affordability ... has been the driver behind the rapid sales of the project,” Mr Kay said. 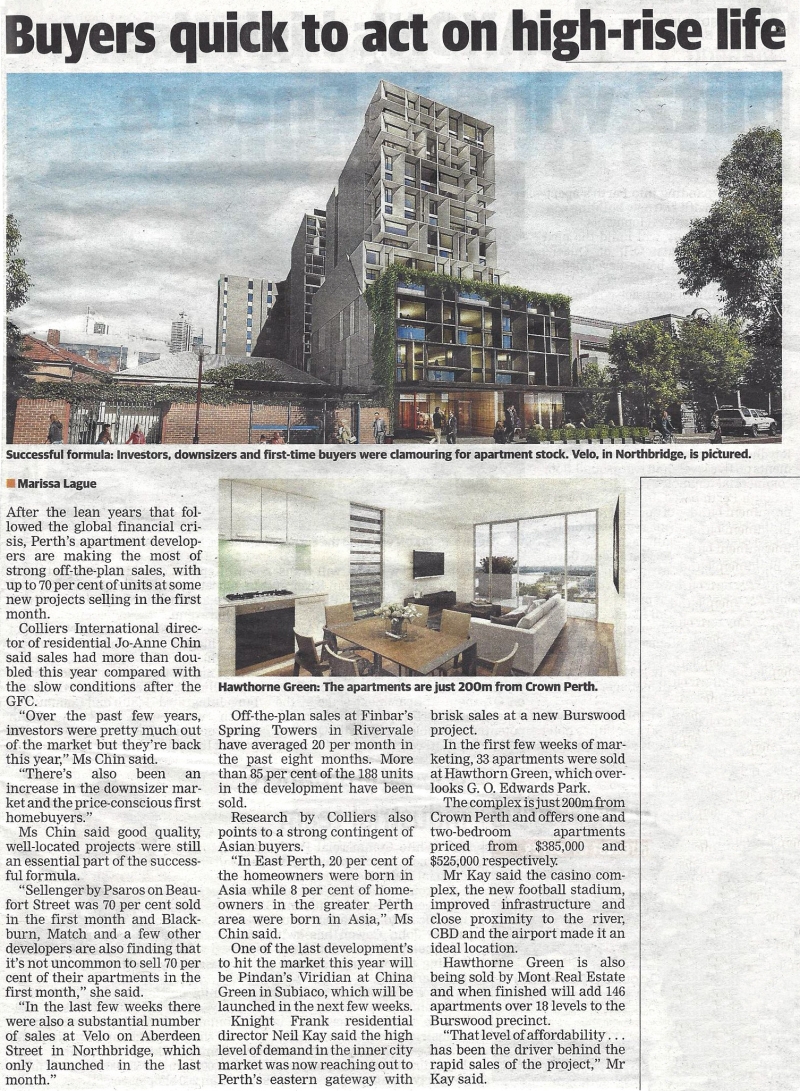