Faced with the confines of a small block, local property developer and architectural practice Baltinas turned to innovative design for its recent residential project on Mount Street in West Perth.

Barry Baltinas likens his latest house design to the Japanese ancient art of paper folding, but in this case using tilted and angular walls to make the most out of a small plot of land.

The adjoining six-storey homes on Mount Street sit on separate green title lots, each comprising 170 square metres – a site Mr Baltinas, founder of the Baltinas group, said had remained vacant since 1998, largely due to spatial constraints.

“It was our recommendation right from day one in 1998 to build two free-standing homes on this property with a previous owner,” Mr Baltinas told Business News.

“It’s had five or so owners, all with different schemes, none of which ever got off the ground. It is such a tight site and to build an apartment building, I think people couldn’t get it to work. We’ve created two vertical homes, architecturally sculpted in an origami fashion. As the walls fold in and out there’s this play of light, shade and reflections throughout the spaces, it makes it more interesting.”

Mr Baltinas said the decision to fold the walls was also based on making the house more functional, creating additional space, as well as enabling natural light – a design practice he said was used frequently in New York, London or parts of Europe to make the best use of smaller lots.

Splitting the levels of the house was another technique used to increase space, with each home’s total are 550sqm.

“The footprint of the house you end up with once you take out the required setbacks such as the lift and stairs, it was not enough space to be able to fit everything,” he said

“The solution was to split the levels. It’s like a zig-zag motion. We’ve built six storeys high and split each floor half a level up and half a level down to the right and to the left, and have ended up with 11 split levels.

“(In) a previous design we saw for the house, everything was squished into one footprint and you ended up having a small kitchen and living room, but by splitting the levels we increase the size significantly, almost doubling the size for those spaces.”

Mr Baltinas said the use of a glass lift and stairway placed in the centre of the building had created a natural light shaft and that the design also borrowed from the ‘reverse living concept’, where the four bedrooms and office were placed in the lower half. Living areas are located upstairs to take advantage of the river, city and Kings Park views, while solar panels line the roof.

“In the top half of the home, the formal lounge features a six-metre-high ceiling which reveals the glass floor swimming pool above and there’s also a kitchen and dining space with floor to ceiling windows,” Mr Baltinas said.

“This is the last property that’s going to be developed on the river facing side of Mount Street, apart from our Camilla Residences,” Mr Baltinas said.

“I think there will always be demand for quality inner-city properties, but there won’t always be the stock available.” 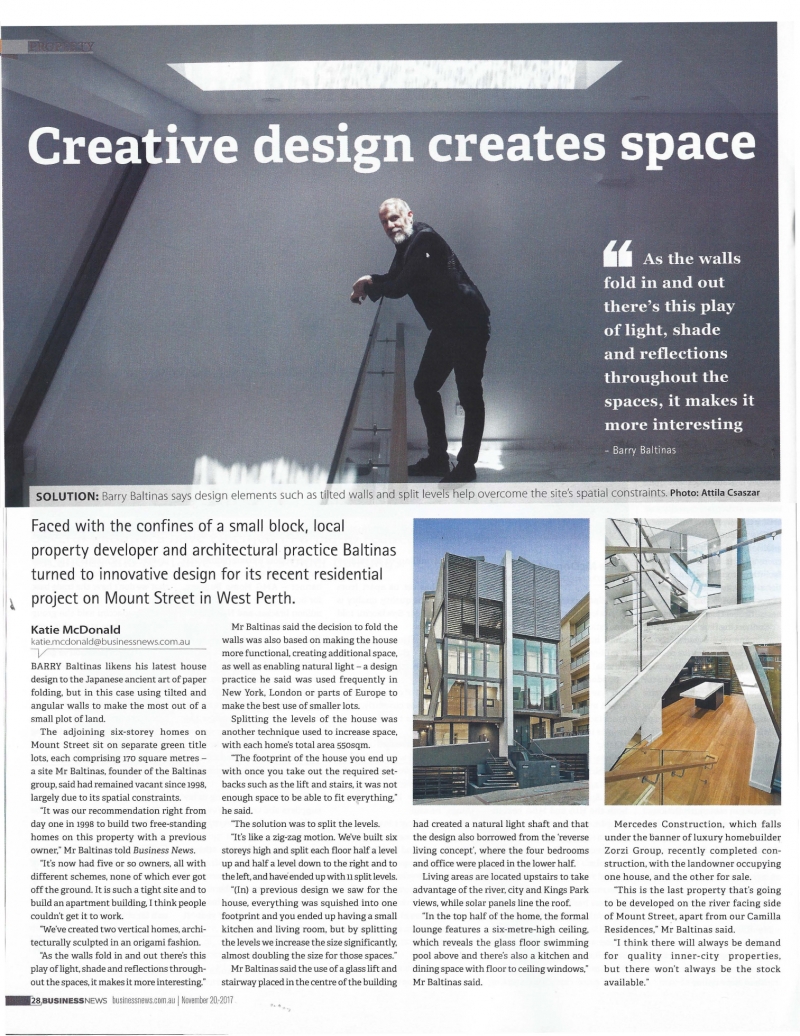