Baltinas Made is releasing a prime piece of real estate on the Beaufort Street strip in Highgate.

Since the 1950s, the site has been owned by the local Challis family who have run Highgate Drycleaners for 67 years.

Founder and architect Barry Baltinas said the company had development approval to subdivide the site into four green-title development lots.

“The first phase of the project involves putting 545 Beaufort Street up for sale while we gather registrations of interest in order to finalise plans for developing the remaining lots — 539, 541 and 543 Beaufort Street, 539 being the corner site.”

Mr Baltinas said the site, which has Beaufort street frontage and rear access, would suit a small developer or owner-occupier.

“A four-level mixed-use development including a penthouse, Airbnb-approved apartments and shop or office space is the most likely plan for this block but it’s definitely flexible,” he said.

“One possibility is that it could be a perfect opportunity for a downsizing couple to secure themselves an incredible home in a sought-after location and simultaneously create business interests to fund their retirement and lifestyle.”

He said a buyer could opt to embrace one of Baltinas’ architectural visions for the site, which involved four different designs for the four lots, or develop their own approach.

“The entire lot is a prime piece of Perth real estate and we could have just built a typical apartment block on there but research globally shows that creating smaller buildings on a site like this has many benefits,” he said. “What it offers are more affordable tenancies, more vibrant and healthier communities and a more engaging activated streetscape.”

Highgate Drycleaners would move during the construction phase but return to form part of the final development of the two corner lots.

The final development, as Baltinas envisaged, would include a cafe, offices and a penthouse apartment.

Baltinas Made has a $28 million apartment development Camilla Residences in West Perth. PACT Construction has begun work on the nine-storey development, next to its Halo on Mount building. 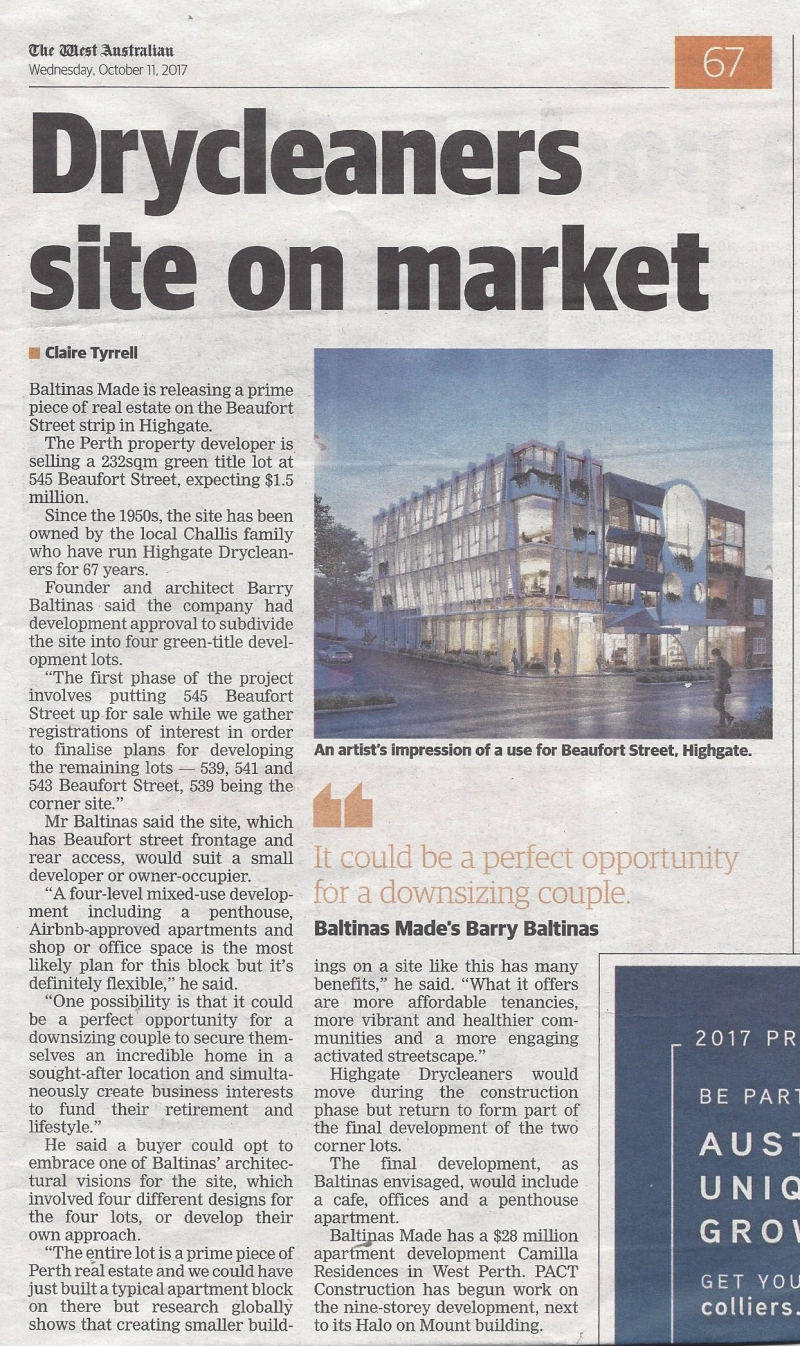