PERTH’S housing market might be struggling, but luxury apartments are red-hot.

While top-end suburbs have suffered the biggest price hits after the mining downturn, sales of high-end apartments are actually increasing.  And industry figures say with more wealthy buyers picking apartments over big mansions, Perth’s most elite postcodes can expect a rise in developments.

New statistics compiled for The Sunday Times by consultants Urbis show that since 2014 the ratio of $1 million-plus sales in the off-the-plan market has more than doubled.

Urbis economics and market research director David Cresp said while data was still being compiled he expected to see a further increase in the figures from the first quarter of 2016.

“The last time we saw this kind of activity in the luxury end was in 2007-2008, but then a lot of people were buying them as investments,” Mr Cresp said. Now it’s predominantly owner-occupiers, mainly, the downsizing Baby Boomer.”

Developer and architect Barry Baltinas, of Baltinas Made, is selling apartments in two luxury complexes in West Perth.  He said while downsizers were a big demographic, they were often bringing their grown up children with them.

“What we’re typically seeing are mum and dad downsizers with kids aged 16-24 still at home wanting an apartment that’s big enough for all of them but also offering privacy for each,” Mr Baltinas said.

“It’s really a case of designing apartments that essentially mean the children can stay at home while they study or work, but at the same time have them virtually out of the nest.”

“They’ll often purchase side-by-side apartments.  One for them and one for the kids,” Mr Dempsey said.  “I’ve even had sales when they’ve bought three – one for each kid.”

Mr Dempsey said the luxury market was still buoyant, citing one South Perth riverfront complex where he had sold four units totalling $20 million in five weeks. He said he was also negotiating offers for a $14 million penthouse nearby.

“Even if they’ve got more than enough money to buy a large mansion, the vast majority (or buyers) that are over the age of 55 are going for the luxury apartment,” Mr Blackburn said. 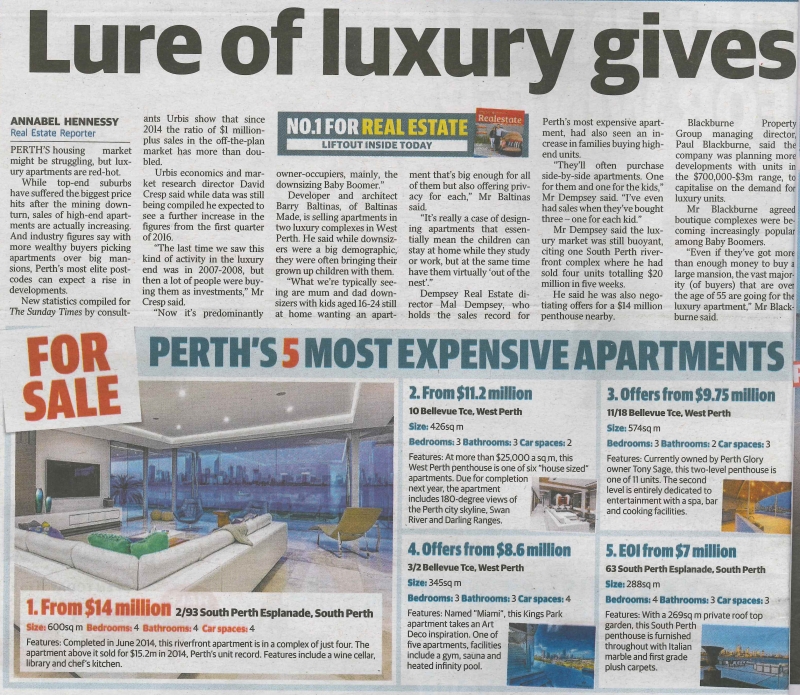