The upcoming transformation of Cottesloe beach has stepped up a gear, with a third development proposal now unveiled in the past month. Architect Barry Baltinas has revealed plans for a $27 Million. seven storey apartment tower on the site of the Beaches Cafe on Marine Parade.

It comes after recent plans for a makeover of the Indiana Tea HOuse and an adjoining boutique hotel. There is also a proposal to demolish the Ocean Beach Hotel and replace it with three towers up to 12 storeys high.

Under a plan, the Beaches cafe site at 122 Marine Parade will have eight apartments varying in size from 185sqm to 315sqm with space on the ground floor dining or shops. Mr Baltinas said the design was sympatheic to the beach front setting, including ocean blue topaz- coloured glass.

"The.... gentle and natural curved exterior becomes an extension of the coastal topograpghy and acknowledges the deep connection of life to the earth, water and air elements." he said.

"Fossilised stone cladding will form part of the ground floor facade and spill into the lobby, framing an enchanted ocean blue jade stone backlit wall, a reflection of the precious coastal elements. "

The developement will sit alongside the site earmarked for a seven storey tower that won approval this year after plans were submitted by developer Gary Dempsey. However, the landowner surprised Mr Demspey by selling the land to Mr Baltinas after the $23Million plans were approved.

Mr Baltinas said he was working with architecture firm Cameron Chisholm Nicol to complete the developement at 120 Marine Parade. He said the approval was contingent on some conditions, which were in the process of being resolved.

"We look forward to sharing these detailed solutions as soon as possible." he said. 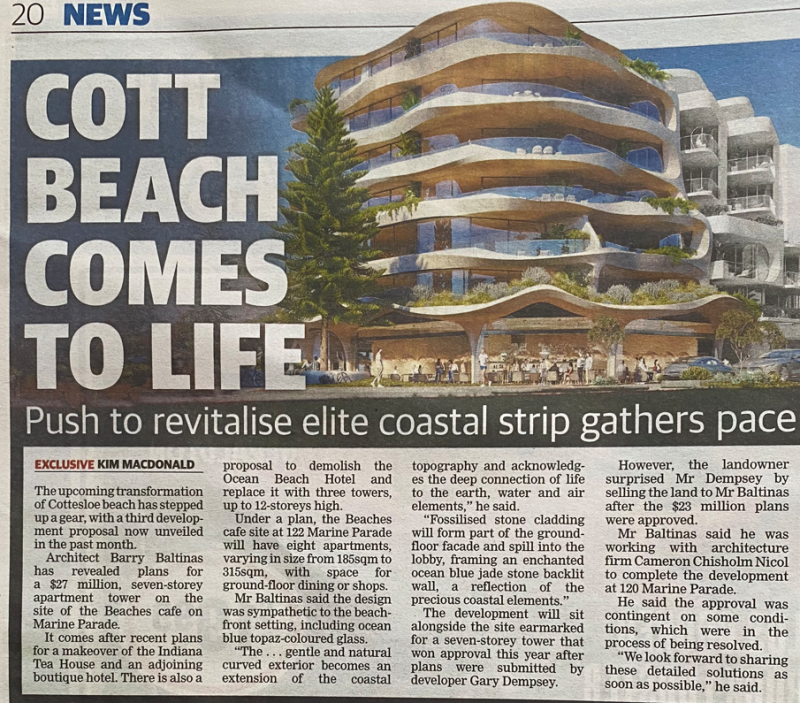